Chris Hemsworth stars in this Netflix action/thriller about a fearless black market mercenary immersed in the deadliest extraction of his life when he’s hired to rescue the son of an imprisoned Indian drug lord whose been kidnapped and taken to neighboring Bangladesh. Written by Joe Russo (Avengers: Endgame, Avengers: Infinity War), Extraction is an adaptation of Ande Parks’ 2014 comic book Cuidad.

To say this is an action film is like saying the Taj Mahal is a pretty nice house. This film has one, laser-focused goal – to showcase a mind-boggling array of intricately choreographed fight scenes – and it succeeds in the wildest, most immersive way possible. Not only are the scenes intense, with a first person shooter, video game vibe to them – they are impressively long – one heart pounding scene lasts 11 and a half minutes. In his directorial debut, stuntman extraordinaire Sam Hargrave (the Marvel films fight choreographer) knocks the action out of the park.

Not only is Hemsworth equally impressive in the fight scenes – he delivers a credible performance, as does Randeep Hooda (Sarbjit, Beeba Boys) as the top aide to the boy’s father and David Harbour (Stranger Things) as a friend of our mercenary soldier for hire. Although the exceptionally violent story itself is a bit anemic on plot, hey, if action is what you seek, you have hit the jackpot with this action/thriller that just made Hargrave an action director superstar.

• To make that 11 and a half minute scene look seamless, Hargrave stitched together 36 segments (some taking up to 25 takes), using a compact, configurable camera system to film from the center of the action, which featured rubber guns and a lot of post production. (India bans the type of weapons used in the film.)

• Although set in Dhaka, Bangladesh, Extraction was filmed in Ahmedabad, India, where fans would wait for 15 hours to catch a glimpse of star Chris Hemsworth. 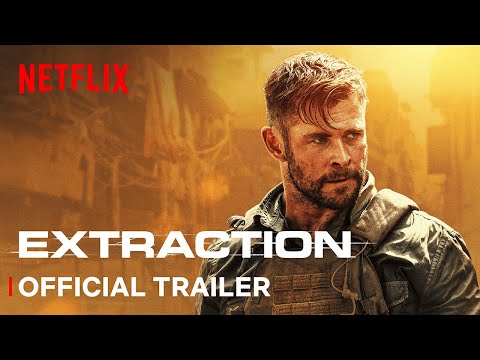