When a 16-year-old gay teen in Sheffield, England decides to come out as a drag queen on prom night, he must combat homophobia from his classmates, his teachers and his own father. This musical is an adaptation of the popular London West End musical, which itself is based on the 2011 BBC Three documentary, Jamie: Drag Queen at 16.

Newcomer Max Harwood is the heart and soul of this wobbly yet cute, feel good musical. His Jamie is immensely likable with heartfelt performances from Sarah Lancashire (Happy Valley, Yesterday) as his supportive mom and Lauren Patel as his brainy best friend, who as a Muslim, is also an outsider at school. Sharon Horgan (Game Night) is the teacher who fights his efforts to be a drag queen and Bianca Del Rio briefly reprises her role from the stage production.

The highlight of the film comes when Jamie first meets his mentor/drag mother Hugo, played by Richard E. Grant (Loki, Can You Ever Forgive Me?). Hugo pops in a VHS videotape, transporting them back to the 80s in a defiant tribute to a generation lost to AIDS. It is an emotional, impactful moment and when this well-intended musical is at its best.

Unfortunately, the rest of the film wallows in mediocrity, with mostly forgettable songs set to cute, colorful dance numbers. The story doesn’t shy away from parents who are unaccepting of their LGBTQ kids, providing a sobering dose of reality, but beyond that, Everybody’s Talking About Jamie is just not all that much to talk about.

• Max Harwood will next appear in the horror/comedy The Loneliest Boy in the World, a zombie satire expected to premiere in 2022.

• Initially this was to be a Disney movie, but following premiere postponements due to the COVID pandemic, Disney sold it to Amazon Studios in May 2021.

• The real Jamie, who paused his Fifi La True drag persona after performing for five years, is now focusing on a career in fashion design. 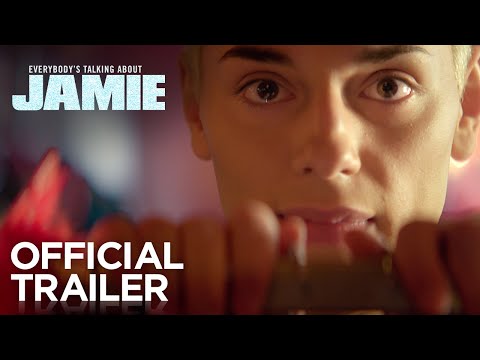