Two former Army Rangers dealing with PTSD, a human and a service dog, are thrown together on a road trip from Washington state to Arizona to attend the funeral of the canine’s newly-deceased trainer, a fellow Army Ranger, in this buddy flick starring Channing Tatum. The big dilemma? The human chauffeur is supposed to have Lulu, deemed unsalvageable for human companionship due to her war zone trauma, euthanized after the funeral in exchange for his reinstatement as a Ranger.

Despite dealing with some weighty issues for a comedy – namely, euthanasia and the differing ways people and animals deal with and are treated for PTSD – Tatum does his best to keep it light by injecting the film with his now trademark, charmingly boyish sexiness and self-deprecating humor. Co-written and directed with Reid Carolin, Tatum also shows a more vulnerable side, illustrating the struggles of veterans coping with PTSD.

Dog has some cute moments – among them, a psychic reading which channels the sweet-faced Belgian Malinois’ thoughts, the duo sharing a bath, and pretending to be a blind man with his service dog to score a suite in a fancy hotel. But while sweet, this slight, predictable story is a bit uneven in its tone, and just doesn’t have much to say.

• In a case of life imitating art, when the COVID-19 pandemic forced a nine month pause in production, Tatum and the dog trainers got more time to work with the three dogs playing Lulu. Three trainers ended up adopting the dogs they worked with.

• In the end credits, the “In Memory of Lulu” is a tribute to Tatum Channing’s late dog Lulu, a catahoula pittie mix that passed from cancer after their last road trip together. 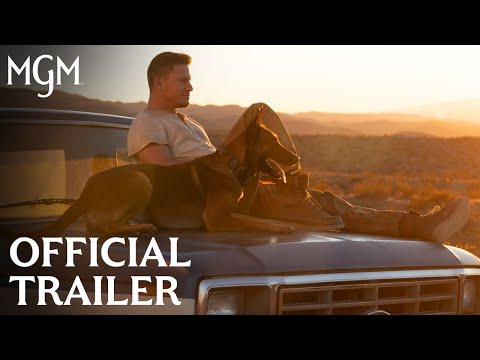