An almost unrecognizable, destroyed-looking Nicole Kidman stars in this gritty crime thriller as a guilt-ridden, vengeance-minded Los Angeles police detective who, 16 years after a botched undercover assignment, has a chance to redeem herself and finally bring a gang leader to justice.

Aided by a very cleverly constructed script, director Karyn Kusama (The Invitation, XX, Jennifer’s Body) toggles between past and present to deliver a stylish, bleak crime drama packed with harrowing, heart-pounding action and one hell of a finale. (And that isn’t even counting that bank robbery scene that will have you on the edge of your seat.) Although some of the drama is a bit overwrought and it is a tad bit long, Kidman is absolutely spellbinding in a role that, thanks to some equally impressive (and at times a bit overdone) facial prosthetics and age-enhancing make-up, looks unlike anything she has ever done before. She is a badass. And the supporting cast – Toby Kebbell (War for the Planet of the Apes), Sebastian Stan (Avengers: Infinity War, I, Tonya) and Tatiana Maslany (Orphan Black, Woman in Gold) – are all equally compelling, resulting in one intense crime drama.

• Nicole Kidman, who also donned facial prosthetics in her Oscar-winning portrait of novelist Virginia Woolf in 2002’s The Hours, says she was so sick with the flu during the filming of Destroyer that she could barely stand for the final scene with her character’s daughter.

• Sebastian Stan originally auditioned for the role of gang leader Silas, but director Karyn Kusama told him she felt he’d be better for the role of partner-turned-boyfriend Chris. 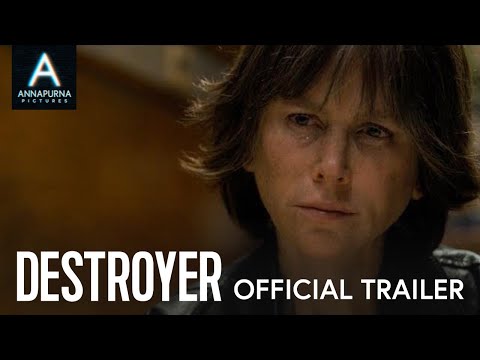