The potty-mouthed, motley crew of lovable fools in Derry, Northern Ireland is back in Season 2 of the comedy series set during The Troubles – the period of sectarian violence between Irish nationalists and British loyalists in the 1990s. Loosely based on show creator Lisa McGee’s own upbringing, this colorful comedy now on Netflix (with really strong accents – turn on the subtitles) features the exploits of bossy busybody Erin, her wonderfully weird cousin Orla, the newly out (but still uptight) lesbian Clare, sex-obsessed Michelle, and Michelle’s English cousin James.

As good as Season One was, Season Two is even a wee bit better, with even more laughs and more heart. The six 30-minute episodes are a quick, easy binge, with McGee masterfully weaving ribald comedy with sweet, poignant moments, all set to the era’s 90s pop tunes – among the lineup, of course, The Cranberries. The equally hilarious adult characters show us that their younger wains don’t fall too far from the family’s comedy tree. The always exasperated school headmistress Sister Michael (Siobhan McSweeney) and Erin’s Ma Mary (Tara Lynne O’Neill) remain scene stealing favorites.

This season features a well-intentioned but disastrous Catholic/Protestant teen peace initiative, the arrival of an inspirational Jean Brodie-esque teacher, a trip to Belfast to see the pop group Take That in concert, the ironically hilarious death of a not-so-beloved family member, and a heartfelt finale that coincides with U.S. President Bill Clinton’s 1995 visit to herald the region’s peace accord. If the finale of Episode 5’s prom night doesn’t flood your eyes with tears, you simply have no heart.

• Although the Derry girls in the series are teens, the actresses playing them are in their 20s and 30s. Nicola Coughlan (Clare), who appears to be the youngest of the group, at 32, is the oldest.

• Britain’s Channel 4 announced in April 2019 that it had commissioned a third six-episode series of Derry Girls, scheduled to air in early 2020. 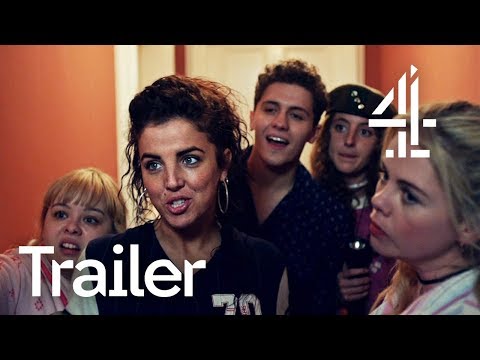