Can a tendency to kill be inherited? Such is the question posed in this AppleTV+ crime series starring Chris Evans, Michelle Dockery and Jaeden Martell as a seemingly picture perfect Massachusetts family whose lives are decimated when the 14-year-old son is accused of killing a schoolmate. The whodunit mystery is loosely adaptated from the New York Times bestseller from William Landay.

The eight episode story is riveting, the writing is crisp and the performances exceptional from Evans, Dockery and Martell, along with a particularly strong supporting cast – an exceptional Cherry Jones (Boy Erased, 24) as their caring defense attorney, Oscar winner JK Simmons (Whiplash) as the imprisoned grandpa, and Betty Gabriel (Get Out) as the sympathetic police detective wanting to help her colleague played by Evans who, oh yeah, also happens to be the community’s assistant district attorney. Despite the occasional unrealistic plot twist and a story that could have been condensed into fewer episodes, the series deftly illustrates the devastating effects that an accusation, a few deceptions and doubt can have on so many lives.

Oscar-nominated director Morten Tyldum (The Imitation Game) throws just enough red flags from young Jacob’s past, along with other potential suspects (a child sex offender, a former best friend), to keep us guessing as to whether Jacob is a murderous, sociopathic bad seed, or just an unlucky victim of circumstances.

• Chris Evans and Jaeden Martell played cousins in the 2019 thriller Knives Out and different ages of the same character in the 2014 rom-com Playing It Cool.

• In addition to being an accomplished stage actress and trained singer, Michelle Dockery (The Gentlemen, Non-Stop) received three consecutive Emmy nominations from 2012-2014 for her role as Lady Mary in the hit series Downton Abbey, again reprising her role in 2019’s Downton Abbey film.

• Betty Gabriel (Get Out) also played a police detective in 2018’s Upgrade. 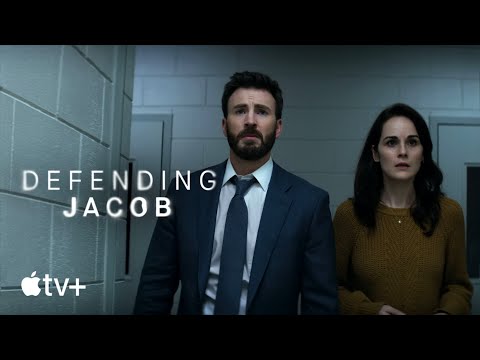