Alexandre Aja (Piranha 3D) directs this horror/thriller about a young collegiate swimmer trying to elude massive, hungry alligators as she rescues her father from the basement of a house that is flooding during a Category 5 hurricane.

Never mind that the film is set in south Florida, where basements are non-existent, or that the fake-looking neighborhood doesn’t even pretend to look like anything more than a movie set or that the silly backstory (about our heroine conquering her fear of not being a fast enough swimmer) is mind-numbingly awful. Crawl has only one purpose – to scare the shit out of moviegoers, and to that effort, it mindlessly and gleefully achieves its goal. Kaya Scodelario (The Maze Runner) keeps the wide-eyed action going, as does Barry Pepper (Saving Private Ryan, True Grit) as her badass dad who, like her, apparently is impervious to gator bites and has an uncanny ability to set his own broken bones.

Like an amusement part thrill ride you’ve ridden again and again, this fast-paced film more typical of the SyFy Channel is as predictable and cheesy as you can imagine, but still massively fun. And at just under an hour and a half, Crawl knows how not to overstay its welcome.

• Although set in Florida, Crawl was filmed in landlocked Belgrade, Serbia.

• Kaya Scodelario got her big acting break in the 2007 British TV series Skins, which led to her movie debut with Sam Rockwell in the 2009 sci-fi thriller Moon. She is married to actor Benjamin Walker (Jessica Jones, The Choice). They have one child.

• Crawl is a reunion for Kaya Scodelario and Barry Pepper, who were both in The Maze Runner films. 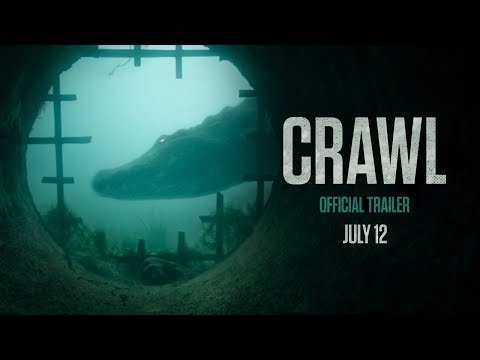