This bizarre sci-fi/fantasy is about a futuristic planetary settlement devoid of women, where men’s thoughts, called Noise, hover like sounds and smoky colored images above their heads.

When a woman (Daisy Ridley) crash lands, one young man (Tom Holland) decides to help her return home – despite the puzzling opposition of nearly all the other men. It is based on the 2008-2010 young adult book trilogy from Patrick Ness, who also co-wrote the screenplay.

Chaos Walking clearly is intended to be a symbolic story about the evils of sexism and toxic masculinity. But it is just so utterly ridiculous, be it the hokey, low budget setting, or Holland’s annoying thought ramblings that flow like he’s overdosed on truth serum. The mildly cute gimmick becomes incredibly annoying after about 10 minutes.

Holland makes the most of what he can from a feeble script, as does Scott, who looks like a cheap knockoff of Milla Jovovich’s character Leeloo in The Fifth Element. And then there is that strange river scene that is a real head scratcher.

Mads Mikkelsen (Another Round, Arctic), looking like a pimped out, Jeremiah Johnson mountain man in a bad, vintage 1970s fur coat, leads the crew of baddies that includes a totally lost looking Nick Jonas as his son and David Oyelowo (Gringo, A United Kingdom) at his most ridiculous. Cynthia Erivo (Genius: Aretha, Harriet) also pops up for a few minutes, in a performance so stiff the director might have been well advised to check her for a pulse. Chaos Walking is a weird, shockingly bad movie.

• Chaos Walking was filmed in 2017 in Montreal, four years prior to its release, and underwent a reportedly massive $15 million in reshoots and a new ending in Atlanta after the original film prompted studio officials to call it an “unreleasable disaster.”

• During filming of Chaos Walking, a stuntman broke Tom Holland’s nose during a fight scene. Holland was also bedridden for four days after getting his wisdom teeth pulled out and missed the 2019 premiere of Avengers: Endgame to do reshoots for this film.

• In the film, the dog Manchee does not exhibit “The Noise,” the ability to broadcast his thoughts as the dog does in the book. 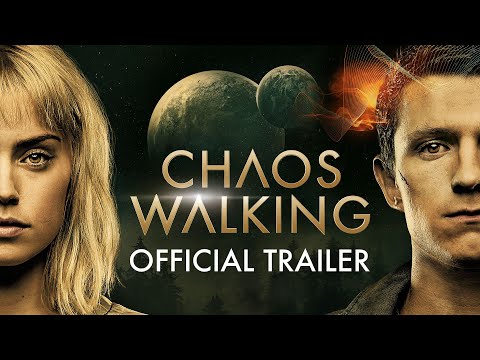