In this 2011 documentary, German filmmaker Werner Hertzog provides an exceptionally rare glimpse inside Chauvet Cave in Southern France, home to the world’s oldest known human creations – paleolithic cave paintings dating back a whopping 32,000 years. This film documents his week-long visit to the highly restricted cave, which was discovered in 1994.

Chauvet Cave is an archeological treasure trove – not only because of the remarkably-detailed cave paintings, which themselves indicate movement and feature border etchings to give them a three-dimensional quality – but for the distinctive human handprints on the cave walls, cave bear paw prints in the soft clay-like floor and a dazzling array of fossils from cave bears and a variety of other, now extinct animals. The spectacular visuals of all of this are mind blowing and will delight any fan of natural history.

But unfortunately, at least half of Herzog’s film feels like unnecessary filler – be it Herzog’s pretentious and pompous pontificating about what life may have been like tens of thousands of years ago or distractingly off-topic interviews. Among the more jarring are one with an archeologist about possible spear-chucking techniques and a strange segment about albino alligators.

Distracting filler aside, the amazing visuals within the cave make this rare documentary an absolute must-see for natural history buffs. There is a 3D version of the film (link below to buy), which gives added context to the incredible cave paintings.

• Cave of Forgotten Dreams was the U.S.’ highest-grossing independently released documentary of 2011, earning more than $5 million in domestic ticket sales. • Caverne du Pont-d’Arc (Grotte Chauvet 2) is a nearby tourist attraction that opened in 2015 to give visitors as immersive an experience as possible to the highly-restricted Chauvet Cave. Occupying 8180 square meters (88,000 square feet), Caverne du Pont-d’Arc is the largest decorated replica cavern in the world.

• Chauvet Cave has been sealed off to the public since its discovery in 1994, due to lessons learned at the Altamira Cave in Spain and Lascaux Cave in France, where widespread human visitation led to mold growth on cave walls that damaged their prehistoric cave paintings. 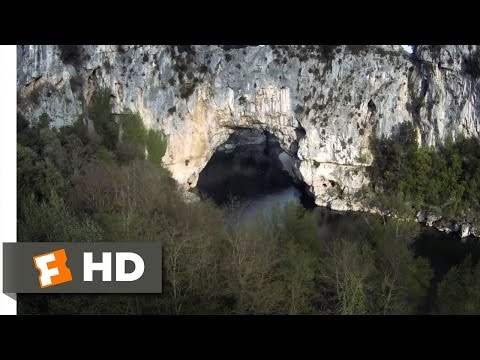