A soldier working on her physical recovery from a traumatic brain injury sustained while in Afghanistan struggles to find her emotional balance upon returning home to New Orleans. A self-reliant loner by nature, she befriends a local mechanic who also has suffered a tragic loss, in this AppleTV+ drama starring Jennifer Lawrence and Brian Tyree Henry.

Causeway is more of a character study than an actual story – its slow pacing gives Lawrence room to shine in a raw, understated performance not seen since her Oscar-nominated breakout role in 2010’s Winter’s Bone. The best parts of this drama are the interplay between her and an also terrific Henry, as well as a strong ensemble cast which includes Tony-winner Jayne Houdyshell (The Humans) as Sharon, the woman who helps rehabilitate her, and triple Tony nominee Linda Emond as her not-so-reliable mother. The film also accurately captures New Orleans’ gritty, super chill vibe.

The problem with Causeway is its very slight story. The characters in this character study just aren’t very fleshed out, making its languid pacing feel more tedious than introspective, and unfairly leaving almost all of the heavy lifting up to its two leads to carry the film.

• The wildly-successful Hunger Games franchise made Oscar-winner Jennifer Lawrence (Silver Linings Playbook) the most successful female action hero of all-time. Her next film is 2023’s comedy/drama No Hard Feelings.

• Causeway was filmed in New Orleans pre-pandemic in 2019. 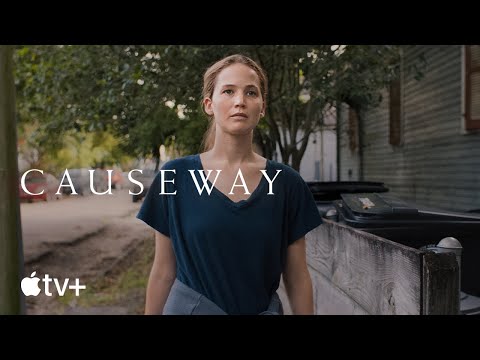