Brittany is stuck in a rut. She’s out of shape, broke and chronically unemployed from settling for low paying odd jobs. Plagued by toxic relationships, she is also profoundly lonely. After a doctor’s visit sparks concern about her poor health and at the prodding of her upstairs neighbor, Brittany runs a block, and from there begins a journey of transformation and self discovery. Brittany Runs a Marathon is inspired by writer/director Paul Downs Colaizzo’s real-life friend and former roommate, Brittany O’Neill.

This is one of those stories that has the potential to become a corny, groan inducer more suitable for the Hallmark of Lifetime channels, and while it does have its share of “those” types of moments, for the most part, it is a refreshingly honest, realistic and heartfelt tale.  Jillian Bell (22 Jump Street) makes Brittany realistic and relatable, and the supporting cast, Michaela Watkins (The Unicorn) as the newly-single upstairs neighbor and Micah Stock (Bonding) as her other running buddy, are a true inspiration.

The movie has a sweet, straightforward message – that only YOU can be responsible for your own happiness. So get steppin’.

• Jillian Bell lost 40 pounds during the filming of this movie, just like her character does in the film.

• Brittany Runs a Marathon, which won the 2019 Sundance Film Festival’s Audience Award, is the first feature film (non-documentary) to shoot during the iconic New York City Marathon. Jillian Bell was so convincing in some scenes, that runners stopped to help her.

• Micah Stock, who plays fellow runner/friend Seth, on acting with Bell: “She’s insanely funny. The first day I thought I would be fired because I couldn’t get through three lines of dialogue without laughing. Her positivity infects everyone around her.” 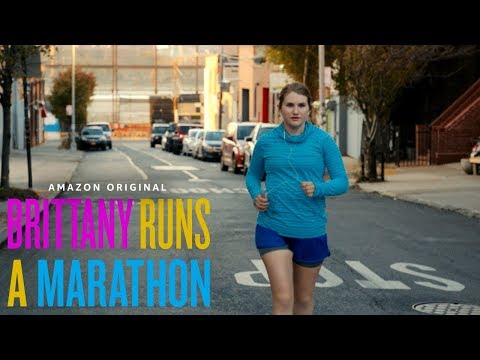