When a woman visiting Detroit for a job interview discovers the Airbnb she is renting for the night is double-booked, she goes against her better judgment and stays, kicking off a nightmarish descent into terror, in this horror/thriller starring Georgina Campbell (All My Friends Hate Me), Bill Skarsgård (It, It Chapter Two, Deadpool 2) and Justin Long (Jeepers Creepers).

At first glance, Barbarian looks to be run-of-the-mill, don’t-go-in-the-basement horror, but writer/director Zach Cregger quickly turns it on its head, with more dizzying twists and turns than a runaway rollercoaster in the dark. Flashbacks – and flash forwards – help flesh out the terrifying story, while respecting the audience enough to let us figure it out without spelling out every detail.

Campbell’s Tess is a terrific protagonist, a wisely mistrustful woman caught in increasingly absurd, gore-filled madness, with heaping doses of spine-tingling frights and humor, and even social commentary on men who are completely rotten but repeatedly convince themselves that they aren’t. The final act goes a bit off the rails, but by the time the credits roll, you’ll be asking yourself, just who IS the barbarian in this crazy, terrifying tale?

• Prior to casting Justin Long as AJ, Zach Cregger originally offered the role to Zac Efron, who turned it down.

• Barbarian was filmed in Bulgaria and Detroit, Michigan. 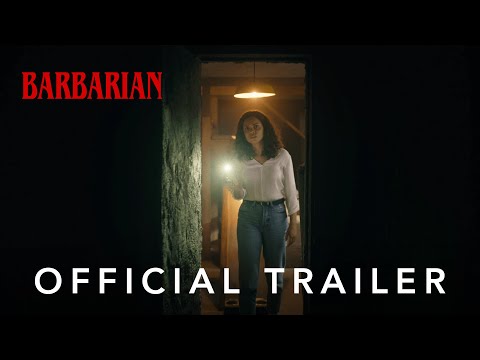