All My Friends Hate Me

After several years apart, socially anxious Pete reunites with old college friends at a posh English country estate for his birthday weekend. Pete soon starts to get the impression none of them really like him anymore, in this dark comedy/social horror. Is it true? Or is he paranoid? Or are they just playing a cruel joke on him?

All My Friends Hate Me is a very unusual but ultimately thought-provoking film. Loaded with a near-constant barrage of awkward and intentionally confusing moments, star and co-writer Tom Stourton illustrates how insecurities and social anxiety can play tricks on an individual’s psyche. When fueled by some potentially mean-spirited jokes or comments, distorted perceptions of reality flourish like an algae bloom in a stagnant pond.

Despite its clever, cringe-inducing and twisty story, All My Friends Hate Me is one of those divisive movies whose likability will be dictated by the viewer’s own levels of social self-awareness and/or social anxiety. Simply put, it’s a real head trip that not everyone will appreciate. And while far from a feel-good movie, it is a fascinating, sad glimpse inside the minds of those tortured souls who feel like no one understands them. You’ll likely be glad you saw it, but also will be glad when it’s over.

• Tom Stourton wrote All My Friends Hate Me with longtime friend and writing partner Tom Palmer, who won Best Short Film for Man of the Hour at the American Pavillon’s Emerging Filmmaker Showcase at the 2018 Cannes Film Festival.

• Tom Stourton and Dustin Demri-Burns both appeared in the 2018 Mila Kunis/Kate McKinnon comedy The Spy Who Dumped Me, as Edward Snowdon and the naked spy Viktor, respectively.

• Georgina Campbell, who plays Fig in the film, stars in the upcoming horror Barbarian, about a woman who learns that the Airbnb she has rented is not what it seems. 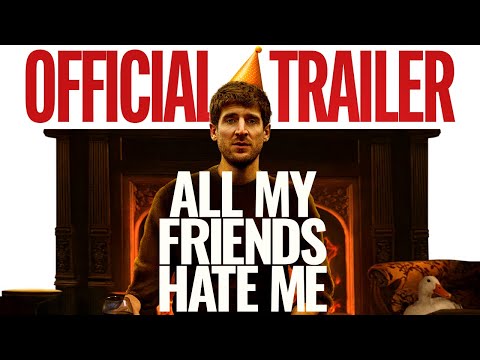