The opening credits for the season achieves absolute stylistic perfection in setting a groovy, retro 80s vibe – a vibe centered around a fun teen slasher mash-up of Friday the 13th, Halloween and Nightmare on Elm Street that is so ridiculous it’s awesome, some funky camera work and an even funkier, synth-laden soundtrack. Although Roberts does a fine job carrying the season, it is Billie Lourd (Booksmart, Star Wars: The Last Jedi) who is the scene-stealer, with her deadpan delivery and wry humor as the slutty, free-spirited aerobics instructor. Matthew Morrison also pops out as the porn-stached activities director who lives to show off his massive schlong in ultra tight, short shorts. Welcome to the 80s, folks! ?

The show’s period horror homages, and not just one but at least two serial killers, entertaining visuals and at times even noteworthy scares results in a fun throwback to the era that is… well… wonderfully campy.

• And just because it is so creepily awesome, here’s the synth-tastic opening credits to AHS: 1984:

• Although he doesn’t appear in AHS: 1984, Evan Peters has appeared in more episodes (94) than any other actor involved in the nine season anthology. Peters’ ex-girlfriend, Emma Roberts, holds the anthology episode record (47) among the AHS: 1984 cast.

• AHS: 1984 marks the acting debut for 2014 Winter Olympic silver medalist Gus Kenworthy, who was offered the part after auditioning for Ryan Murphy a few weeks after meeting him at a dinner party in New York. Kenworthy thought he would be auditioning for a small walk-on part but was surprised when Murphy offered him the part of Chet, the sexy jock. 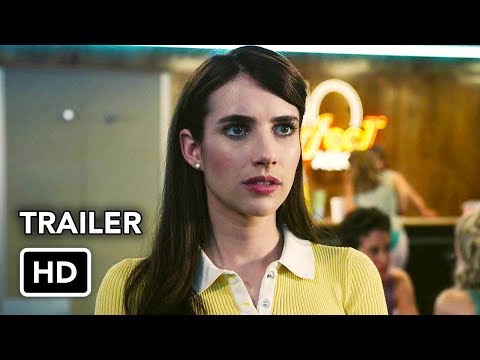