Four teenage girls scuba diving through submerged Mayan ruins off Mexico’s Yucatán peninsula are shocked to discover they are surrounded by a school of deadly Great White Sharks. As their air supplies dwindle, the hysterical teens must race against the clock to avoid the sharks and escape the ruins’ labyrinth of caves and tunnels… or perish.

This totally unrelated follow-up to 2017’s way more entertaining and slightly less ludicrous 47 Meters Down stars Sophie Nélisse (The Book Thief) as the nerdy target of school bullying who joins some not-so-nice girls and her stepsister – played by Brianne Tju (Hulu’s Light As a Feather), Sistine Stallone and Corinne Foxx (the daughters of celebrities Sylvester Stallone and Jamie Foxx) – as the unfortunate foursome whose super fun dive trip goes terribly wrong. Despite the naturally terrifying subject matter (the sharks, not the mean girls) co-writer/director Johannes Roberts (The Strangers: Prey at Night) churns out one surprisingly thrill-free thriller. Every time a shark attacks he cranks up the volume on the score and adds a red filter to the camera to let us know that a character is becoming lunch. (Gee thanks, Johannes.) The sharks look fake, the submerged Mayan ruins look fake (in one scene when Tju touches the “stone wall” it moves like the super soft sponge it actually is), and the piss-poor acting is fake.

Nevermind the fact that these newbie divers are outfitted with scuba suits and extremely  complicated full-face masks with built-in wireless intercoms (but oddly, no BCD or fins) after entering the water in street clothes – this preposterous, blatant money-grab of a film doesn’t just strain the bounds of believability – it bursts right on through, including a laughably ludicrous, super slow motion ending. This film is so bad you’ll find yourself rooting for the sharks. More chum, please.

• The film originally had two other titles: 48 Meters Down and 47 Meters Down: The Next Chapter

• Initially slated for a June 28th release, it was pushed back to August 16th so as not to compete with Annabelle Comes Home. Wow. 😱 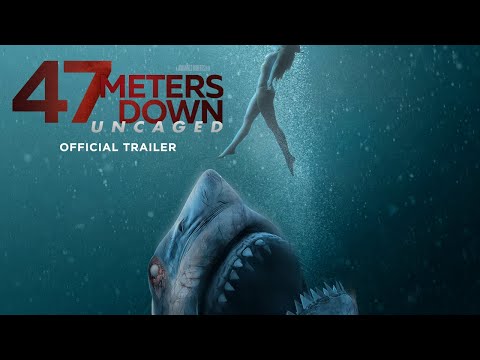