The Banshees of Inisherin

Set in 1923 on a remote island off the coast of Ireland during the nation’s civil war, this is the story of Pádraic, a sweet, simple farmer who is devastated when his more intellectual, music-composing neighbor Colm abruptly ends their longtime friendship, cruelly saying he no longer wants to waste time on such a dullard. Heartbroken, Pádraic tries to change Colm’s mind, leading to a shocking ultimatum in this dark comedy/drama starring Colin Farrell and Brendan Gleeson.

Reuniting with his two stars from his 2008 dark comedy In Bruges, writer/director Martin McDonagh (Three Billboards Outside Ebbing, Missouri) masterfully blends absurdist dark comedy and heartbreaking tragedy in this simple but deeply symbolic tale about the burdens of friendship and the toxic, spiraling effects of rejection – namely, Colm’s rejection of Pádraic’s friendship, and Pádraic’s rejection of that rejection.

Farrell gives a phenomenal, career defining performance, with an also terrific Gleeson and strong supporting performances from Kerry Condon (Better Call Saul, Three Billboards Outside Ebbing, Missouri) as Padraic’s bookish sister Siobhan – one of the few on the island who can connect intellectually with Colm – and Barry Keoghan (The Killing of a Sacred Deer, The Green Knight, Dunkirk) as Pádraic’s dimwitted friend Dominic, the son of the island’s sadistically abusive policeman. Dominic’s ability to simultaneously annoy and break your heart is absolutely devastating.

The nuanced performances – facial expressions serving as canvasses into the tortured souls of McDonagh’s characters – are exceptional – and will have you mentally replaying your own past friendships throughout your life. With several heartbreaking moments, postcard perfect cinematography, a stirring score and loads of other quirky, petty and even spiteful characters, The Banshees of Inisherin is easily the most heartbreaking and haunting film of 2022.

• In Irish folklore, a banshee is a spirit that heralds the death of a family member through screaming or shrieking.

• The J.J. Devine Public House built on Achill Island in County Mayo just for the film had to be demolished afterwards due to permitting issues.

• Writer/director Martin McDonagh won an Oscar for his 2004 live action short Six Shooter and has earned three more Oscar nominations – for 2008’s In Bruges, 2012’s Seven Psychopaths and 2017’s Three Billboards in Ebbing, Missouri. He has been in a relationship with Fleabag star Phoebe Waller-Bridge since 2018. 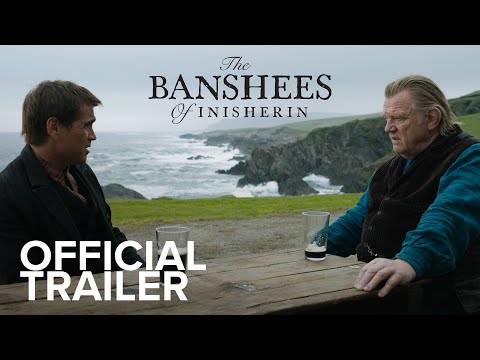